People of all ages have a tendency to think in terms of straight, one-way explanations when in fact, more complicated causal relationships exist.

In one study, students were asked to describe the relationship between wolves and rabbits. Most immediately responded that wolves eat rabbits, end of story.  With additional questioning, though, they were able to identify the mutual interdependence between rabbits and wolves, commonly called a predator-prey relationship—a relationship that is not one-way or linear, but rather made up of a closed loop of cause and effect. This loop shows a dynamic relationship: For example, the number of births of one species affects the population of the other. If the rabbit population grows rapidly one year, the wolves are fat and healthy, and thus able to have more babies the next year. More young wolves will eat more rabbits, decreasing the reproductive population of rabbits. As the population of rabbits decreases, the population of wolves will eventually decrease as fewer rabbits means less-healthy wolves and fewer babies the next year. This example assumes that in this case, rabbits are the primary food for the wolves.

Read this essay to find out more about dynamic systems. 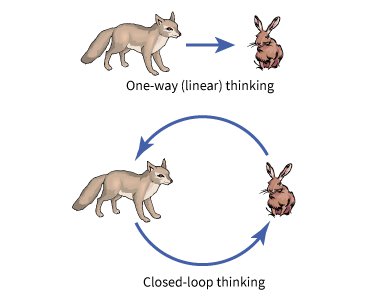 Can you list other examples of one-way, linear thinking you often hear about, where a closed loop of cause and effect is actually present?  (Hint: Think about unintended consequences. Spraying pesticides to kill bad bugs seems like a solution, but the beneficial bugs are killed, too.)